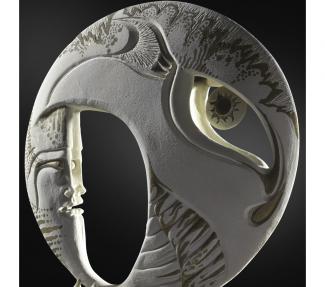 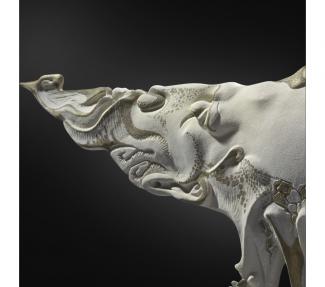 Jesus Christ, Son of God, Savior - sounds different in different languages. The origins of this notion descend form the acrostic Ichthys (Jesous Christos Theou Yu Soter), in ancient Greek it means «Fish». The search of laws in that coincidence captured the minds of the first Christians… The comparison of the events and dates enables us to say that on the hypothetical Christ’s date of birth (7 B.C), Jupiter and Saturn met three times under the star sign Pisces.

That is why, Jesus was regarded as the personification of the Fish Age. Newly converted Christians were called «pisciculi» - fishie, a font for the christening was called «piscine»  - fish tank. The fish itself and bread were thought to be a symbol of a divine meal. As a result, one of the first Christian symbols appeared remaining magnetic to this very day.

At first sight, the composition includes nothing directly pointing at Christianity. The most experienced viewers think of myths, of a wise and strong man-fish like Babylon Ea or Schumer Enky and of cosmogeneous ideas of ancient people where the land was washed by the World Ocean and the Sun sailed around the Earth in the Sun Boat above the Earth and on a fishback below it. Indeed, such interpretation has reasons: the silhouette in the upper part of the composition resembles the sea surface and the sun’s disk touching the horizon.

The fiery disk of the sun is in the upper part of the composition. The half moon is inside it. Two images directed inside the disk are symbols  of duality. The tearing eye is the all-seeing eye. Wing’s feathers are strength of flight, the movement. The flame in the upper part of the disk is the sacrament of creation. The fish’s back is the horizon, a symbol of unification of spirit and substance. The sage’s face directed to the stars is the symbol of perceiving the truth. The beard turning into a spear is a ram which destroys everything on its way - striving for cognition. The sharp hook in the upper part of the fish’s tail is the scorpion’s bite, the death. Thorns making the fish move are the impulse of the thought’s evolution embodied in the substance.

The author’s treatment excludes any attempts of paganism interpretation of this composition. «The fish» was based on the comprehension of Christian symbols and concepts.