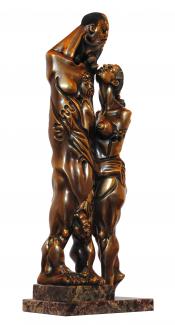 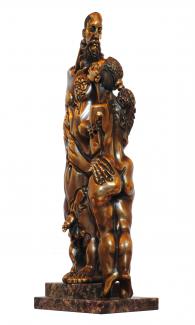 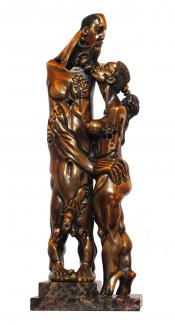 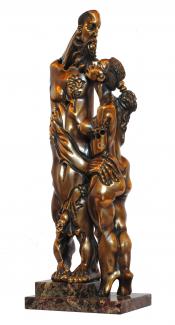 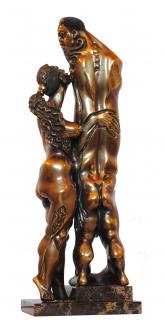 So God created mankind in his own image,

in the image of God he created them;

male and female he created them.

God blessed them and said to them,

The author’s interpretation of the biblical story is connected with temptation by love. The sculptor converted the traditional allegories and symbols into a new language of plastic art. Therefore, there is neither the traditional apple nor the serpent. The man and the woman do not look worried. Paradise is long lost for them. They have already experienced the joys of love. Eve is a naïve tempter. The serpent has shown her the way to pleasure but forgot to warn her that pain is an unfailing companion of love.

The strict vertical between the figures of the man and the woman is the symbol of the separating divine axis appearing where polar opposites touch.

The figure of Adam is set on a small pedestal. Only one step separates the man and the woman but Eve will never manage to climb it. She was created from Adam’s rib and, unlike Lilith, is totally subdued by Adam.

The composition presents Adam as strong, wise and clumsy in a masculine way. Haughty and arrogant, looking down on Eve, he doesn’t even notice that he has stepped his own toe.

Eve possesses a strong solid body. Even though Adam’s hand is masterfully placed on her hip and her hands are only touching the man’s body slightly, he is in her embrace. It is Eve that guides Adam in the process of learning the art of love. Eve’s hand, a thin embossing on Adam’s body, slides down and stops at the basis of his phallus. This is a symbolic gesture. It is natural and devoid of vulgarity. At the end of Adam’s phallus there is a flower resembling a daisy.

The forefather’s torso is intentionally made straight. On the left side of his breast, as if they were heartbeat, are carved two flowers interweaving with each other. The straight flower, Adam’s flower, represents the masculine beginning. The curved winding flower is Eve’s flower. Another symbol present in this composition is the bud ready to bloom on the woman’s leg. Eve herself is like a flower ready to bloom. “The bud is always admired as this state is so short. Later it turns into a flower and becomes the same as all others… fading”.*