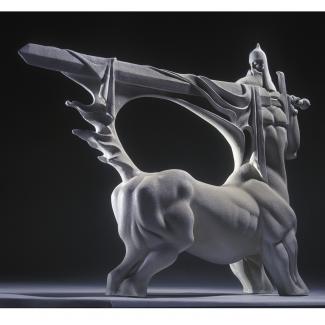 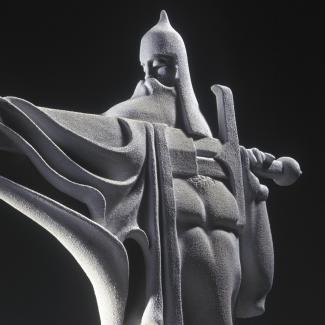 The shape may change, the sense will not.

Strength is to violence often brought.

The sheath will not retain the sword.

And life will never change its lot.

Russia is presented as a centaur with a helmet of a Russian warrior on its head and with a sword partly pulled out of its sheath.  No one has ever presented Russia this way before.

Since the times of Ancient Greece centaurs, mythical beasts with a body of a horse and a head and a torso of a human, have been a symbol of duality. The horse embodies male solar power and serves as a pedestal for lifting up the human spirit.

In the sculpture “Russia” the warrior’s look is directed at the sword, as if he is recollecting the wars that were waged on the Russian land. This work by Alexander Samvel is not about Ancient Russia or its heroes, not about wars that roared there long before. This composition is about Russia in the times of change.

The sword is tightly clutched by the centaur’s hand and unsheathed to a quarter, which denotes danger. The centaur’s second hand is merged with the sword. Between the sword and the horse’s body there is an empty egg-like space. The egg is a symbol of life. If the sword is pulled out completely and the sheath is thrown away, the egg will stop existing. That is the logics of the composition that accords with the artist’s idea.

The smoldering international and religious conflicts taking place in the modern world blaze up and go out like sparks. It can take one incorrect decision to make the fire rage, destroying everything in its way. Then the wild forces kept back for some time will come out.

The compositional structure of “Russia” reflects this idea. It is built on the controversy between differently directed movements. This is how processes taking place in Russia today find their manifestation in plastic art.

Ancient Russia, the USSR, modern day Russia, rich and poor, strong and weak-willed, combining the culture of Europe and Asia, is in the process of development, which cannot be painless.