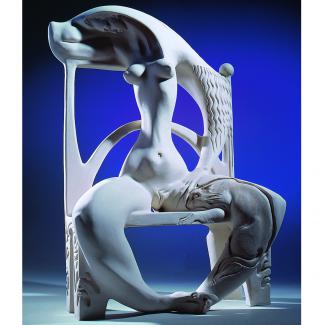 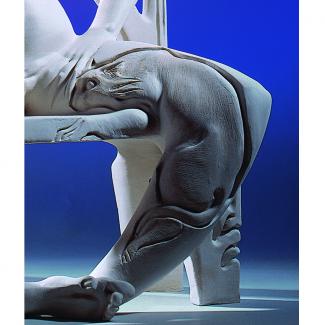 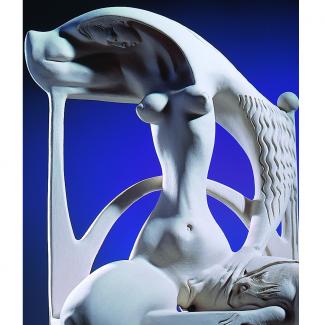 “I dedicate this composition to all women over 40…”

In the cultures and myths of Egypt, China, England, Russia and many other nations the image of a cat plays an essential part. The cat’s eye, changing its color depending on the light that falls onto it, is deceptive, and the cat’s ability to hunt in complete darkness deserves it the reputation of a creature that allies with the dark powers. When a woman is called a cat, her sensuality, stamina, love of freedom, appeal, plasticity, unpredictability and mystic connection with the world of the unknown is emphasized.

On an unusually wide chair with a high straight back decorated on one side with a small ball, there is sitting a woman with her legs outstretched. Her feet are joined together. One foot seems to be caressing the other one. The forefinger of her left hand is covering the entrance to the warm moist world of the woman’s womb and at the same time is caressing the clitoris. This is a symbolic gesture, a provocative gesture. For some viewers this gesture is the only thing they notice about “The Cat”. However, it should be noted that this gesture is veiled: the hand is deliberately made as an embossing on a round shape. The woman’s head is partly covered. Her face is strict and thoughtful. She is recalling her spring, summer and autumn and is afraid to face the winter of her life.

On the woman’s leg there is an embossing of a cat. It is extremely difficult to combine the anatomy of a woman’s leg with the anatomy of the animal in such a way that the curves and protuberances of the leg would become the curves and protuberances of the cat’s body. The cat crawling up the woman’s leg is a symbol of the man. The cat does not immediately catch the eye. This embossing on a round shape, half phantom, is a symbol of love. The embossing on a round shape is a device that the sculptor uses in totally different compositions. The viewer’s eye is made to travel from the two-dimensional space of the embossing to the three-dimensional space of the plastic body and back. Thanks to this effect an expansion of the artistic space is achieved. The placement of a two-dimensional image on an uneven surface demands from the sculptor flawless knowledge of anatomy and artistic tact.

The legs of the bench, where the cat is sitting, are executed in the shape of men’s masks, which symbolise particular time periods in the “cat’s” life. They were this woman’s partners in her spring, summer and autumn; love for these men is gone. The woman’s head breaks out from the hard rectangular frame of the bench, which creates the impression that  the woman is looking down on the years gone and evaluating them from the height of her age in an attempt to perceive the mystery of the meetings and partings, births and deaths.

The rectangular of the bench can be comprehended as a hard time limit that a person gets for their life. The basis of the composition is formed by geometric figures: a circle, a cross and a rectangular. Complicated dynamic movements develop within the fixed geometric elements, connected by a vertical axis. In Platon’s philosophy the square, the triangle and the circle are considered perfect divine shapes.